Free speech is crucial and must be defended.

The founding fathers recognized this and gave us the first amendment as a guard against tyrannical government, so that we are free to spread ideas even when those ideas are not popular with those in power.

Many influencers with outspoken political views—especially Conservatives—feel that their voices are being shut down by big tech, whether silently by an algorithm or blatantly by outright ban. From what I can tell, in many cases they are right. This is a very serious problem not just for any single person affected by this, but because it will serve to further divide people into their own echo chambers. Rather than a place to spread ideas, this brand of censorship is turning social media into a place to go to confirm our own biases and entrench us in our singular beliefs.

If we value the principle of free speech, naturally we must take action to prevent this! 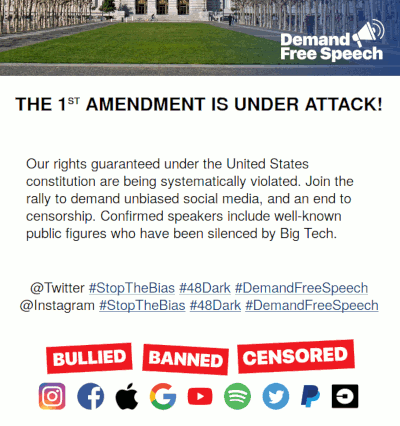 Many—including organizers of the recent rally for free speech which took place at City Hall on Friday—frame this as an a violation of their first amendment rights. The first amendment protects our right to free speech and they believe these tech giants are consistently infringing on this right.

This belief is not only misguided; it is dangerous.

The first amendment empowers citizens to check the power of their government by preventing government from taking coercive action against them in response to what they say. The actions taken by tech companies like Twitter or Facebook, however, are not part of this deal. They are neither a Government entity nor are their actions coercive.

I know, I sound like a corporate apologist. But why is this distinction important?

The first amendment affirms a NEGATIVE right; your right NOT to face retaliation from the State for your speech.

Applying the first amendment to a private platform like Facebook or Twitter is asserting that they do not have the right to block you from using their services as a result of your speech. That implies that you have a POSITIVE right to use their services which is being infringed.

Weaponizing the first amendment in this way would only be employing government coercion to force anyone with a platform to let anyone else use their platform for their own speech. Your ability to use the services of Twitter or Facebook is a privilege, not a right. It is a privilege that can be revoked at the discretion of whoever controls the platform—as it must be, if we believe in free association.

Let me reiterate; I want to live in a world where free speech is held high as a defining principle. However, my free speech cannot tread on your right to choose whether to associate with me. You can say what you like, but I’m not obligated to invite you into my house for you to say it.

Free speech in the voluntary sector must be a value ingrained in our culture. Make it clear that's what we want, and the market will fill this demand.

What we can do to protect the principle of free speech is to clearly demonstrate that we value it. A rally to demand free speech is a perfect approach to accomplish this, which makes this rally at City Hall on Friday particularly disappointing. Their hearts are in the right place and they have a clear message of what they want, but their messaging falls into the trap I've described. Instead of looking to government to grant us additional rights at the expense of the rights of others, emphasize the value of this principle and instill it into our society. Instead of holding a rally at City Hall demanding that Government solve our problems, take the message to the companies themselves.

And if they won’t listen, be prepared to stop using their services. When enough people do that, then they will.

If that seems impossible, it isn’t. It certainly isn’t easy, but who said liberty was going to be easy?